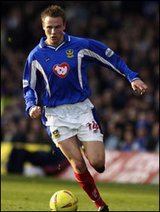 Yesterday you selected Michael Essien and Tom ‘The Bunker’ Huddlestone to slot into the central midfield of your team of the season. I suspect there may have been some double votes for The Bunker, but he got so many that I have to let him in. And that’s no bad thing – he is, after all, a talented young English midfielder with great vision and a fierce shot. Essien’s selection was a no brainer. The pair join Petr Cech, Steve Finnan, Patrice Evra, Nemanja Vidic and Joleon Lescott in Pies team of the season, as voted for by you, the readers.
Today we’re asking you to vote for two wide midfielders. Click below to see our shortlist and make your selectionâ€¦

Pick your top two, click in the box by their name and Bob’s your uncle.