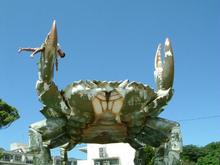 Ian Holloway is on top form in his BBC column this week, reminiscing about the time he played with the late, great Alan Ball and slagging off the poker-playing skills of his Plymouth Argyle players. However, Ollie peaked when he started rambling about how human beings are losing the art of conversation:
‘I think us human beings will end up with thumbs like giant crabs pretty soon because of all the texting that goes on and the playing of these stupid computer games, and we’ll have lost the art of talking. It really does worry me. But the good thing for me is that I can talk for everybody who ain’t talking, so I love it!’
Brilliant. Does he mean we’ll have thumbs shaped like giant crabs, or thumbs shaped like giant crabs’ thumbs? Either way, you have to admire a football manager who’s not afraid to talk about giant crabs in such a frank manner.