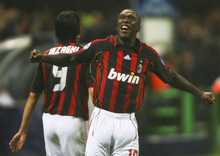 AC Milan
Dida Did he touch the ball in the first half? Hardly. Looked sound enough when called upon in the second half though. 6
Kakha Kaladze An underrated defender. Tenacious, unruffled, never lost control. 7
Alessandro Nesta One of the easiest nights he’s ever had in Europe. A genuinely world-class centre-half. 8
Massimo Oddo Wasn’t overly troubled by Ronaldo and co and managed to attack down the flank at his leisure. 7
Marek Jankulovski Kept Ryan Giggs in his pocket. 7
Massimo Ambrosini The unsung fourth member of Milan’s midfield worked his socks off. A solid citizen. 7
Gennaro Gattuso Seemed to be three of him on the pitch at once. Milan’s heartbeat, in the way that Roy Keane was for United. The term ‘midfield general’ may be a cliche, but it applies perfectly to Gattuso. 9 MAN OF THE MATCH
Clarence Seedorf Has already won the Champions League with three different clubs (Real Madrid, AC Milan and Ajax) and last night you could see why. Set up Kaka’s goal, scored himself and strutted around like he owned the midfield. 9
Andrea Pirlo Took a couple of below-par free-kicks but apart from that he was his usual classy self, pulling strings and gliding about the place. 7
Kaka Fired up for this one and it showed. Never tries a trick for the sake of it; brilliantly direct. 8
Filippo Inzaghi Got in the faces of United’s defence but was outshone by his team-mates in midfield. 6
Man U player ratings belowâ€¦ 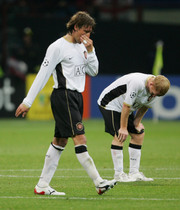 Manchester United
Edwin van der Sar Never a good sign when your best player is your ‘keeper. 7
John O’Shea He’s no Gary Neville. Looked way out of his depth. 4
Wes Brown Probably United’s best defender last night, but you wouldn’t say he had a particularly good match. 6
Nemanja Vidic Clearly lacking match fitness – when he was skinned by Kaka early on, the writing was on the wall for United. 5
Gabriel Heinze Played like a cross betwen a headless chicken and an enthusiastic puppy. His form has been all over the shop since he returned from injury. 5
Darren Fletcher Found himself in a one-on-one with Dida but sliced his shot wide. Totally undone by Seedorf, Pirlo and co. 5
Michael Carrick United’s most disappointing performer. If he had one tenth of Roy Keane’s hunger and dynamism he could be great. United needed Carrick to be a leader in central midfield. He failed them miserably. Even his passing, his strongest suit, was all over the place. 4
Paul Scholes Seemed overly cautious in the first half (worried about his yellow card situation?) but improved as the game wore on. Looked his age last night though. 5
Cristiano Ronaldo Wasted vital free-kicks – generally nothing he tried came off. Must learn to play it simple. See Kaka. 5
Wayne Rooney No help from his midfield and really struggled up front on his own. Poor first touch at times and also looked tired. 5
Ryan Giggs I thought he had a shocker and should have been taken off at half time. Never in the game and, like Scholes, starting to show his age after a long season. 4
[Photos: Getty Images]