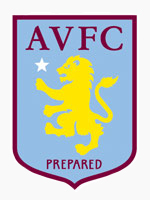 Villa’s new crest (on the left) actually looks older than the one it replaces (shown on the right). Brand new retro, you might say. EPL Talk has the lowdown on the new crest:
‘The star signifies the one European Cup that Villa won. ‘Prepared’ is the club’s motto. The use of ‘AVFC’ to signify Aston Villa Football Club also is very retro as more and more clubs these days avoid putting the words ‘FC’ into their crest (the best example is Manchester United).’
I like it. It looks classy and pleasingly simple. What say you?