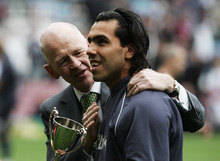 CARLOS TEVEZ TO SCORE FIRST FOR WEST HAM V MAN UTD (9-1)
Itâ€™s just three clean sheets in 12 games for Man United and it could be worth taking a chance that Carlos Tevez (six goals in nine games) can bag a surprise opener amid the carnival atmosphere at Old Trafford. The Argentine is in the shop window after all and this wouldnâ€™t be a bad way to impress Sir Fergie.

LIVERPOOL TO BEAT CHARLTON 3-0 (9-1)
Charlton have shipped goals away from home (10 in five, which would be more but for impotent Man City, as ever, firing blanks) and Liverpool can repeat the drubbing they handed out to the Addicks earlier in season. Especially with European Cup final places on the line.
NEWCASTLE TO BEAT WATFORD (7-4)
There could be value in swimming against the tide and hoping that Newcastle players react positively to suddenly becoming Roeder-less. With Big Sam in the wings players are playing for their futures and, despite Newcastleâ€™s obvious problems, they are still 15 points better than Watford. They now have Owen back, too.
BOLTON v VILLA / SHEFF UTD v WIGAN TO BOTH BE DRAWS (around 12-1)
Villa are on a good run (now eight unbeaten) which they can extend with a 17th draw of the season at Bolton, who are ending the season with a whimper. Sheffield United need a point to be mathematically certain of survival and, with Wigan fighting for their lives, could settle for the draw.
DAVE WHELAN TO STOP BOOING ABOUT IT (1,000,000â€“1)
Ok, thatâ€™s not true (itâ€™s more like 1,000,000,000-1) but there has been a noise for Latvia in the Eurovision song contest at 20-1.
[Lee Honeyball]
Last week’s bets: Lee correctly tipped Everton to beat Portsmouth and Ipswich to beat Cardiff.