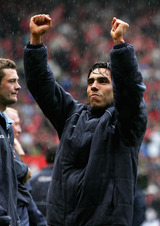 With the official presentation of the Premiership trophy taking place after the final whistle, this result left everyone inside Old Trafford happy. Man Utd didn’t play their strongest team, but they still dominated large parts of the match and should have at least managed a draw. West Ham’s goal led a charmed life though and in the final 20 minutes they looked quite comfortable, safe in the knowledge that Man U needed to score twice to threaten their Prem status. People slag off Lucas Neill as a mercenary, but I thought he was inspirational at the back. Nigel Reo-Coker also had a great game, with sterling support from Yossi Benayoun and Mark Noble in midfield.
I laughed when Man U fans sang ‘You’ll never see him again!’ after match-winner Carlos Tevez was substituted, but the fact is Tevez will surely leave Upton Park now, maybe even to play for Man U (I wouldn’t be surprised if Reo-Coker joins him). Wherever he ends up, Tevez’s status as a Hammers folk hero is assured – I’m sure fans will sing his name at the Boleyn for many years to come.