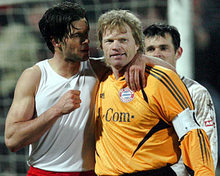 German sex toy company Beate Uhse has been ordered to pay â‚¬50,000 in damages to Michael Ballack and Oliver Kahn after selling vibrators named after them during last year’s World Cup in Germany.
The company sold World Cup special edition vibrators called ‘Michael B’ and ‘Olli K’ in three shops.
My head is spinning with the pun possibilities here, but it’s Monday morning so my brain is not up to speed yet. Suffice it to say that I could imagine Kahn starring in a low-rent German porno, probably as some sort of overll-clad handyman with ‘a big tool’. And does this mean that ‘Kahn und Ballacks’ has entered the German language as slang for, you know, ‘cock and balls’?