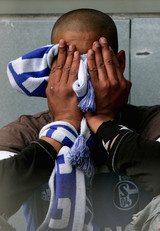 Poor Schalke. They got within seconds of winning the Bundesliga in 2001, only for Bayern Munich to snatch the title from under their noses with a goal in the 94th minute in their game in Hamburg. Schalke fans had been told they’d won the title and had begun celebrating, but Bayern ruined the party.
Now it looks like lightning will strike twice. A few weeks ago, Schalke were six points clear and marching confidently towards their first championship since 1958. Last Saturday they had a chance to take the title with a week to spare, by beating local rivals Borussia Dortmund. However, Schalke played like rabbits caught in headlights and lost 2-0; meanwhile, Stuttgart notched up a seventh straight win to climb two points above them with just one game to play. Aaaaargh!
Stuttgart need to win at home to Energie Cottbus to land their first title in 15 years. The problem for Schalke is that Cottbus have nothing left to play for, so there’s no way I can see Stuttgart messing up. What a bummer – no wonder Schalke fans are feeling a sick sense of deja vu right now.