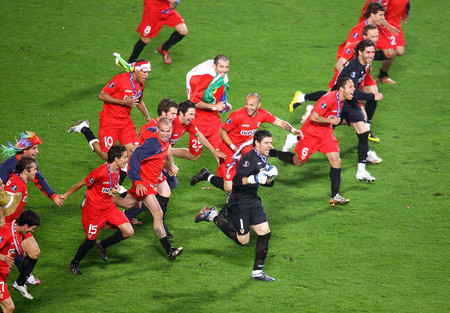 English football fans who decided to watch the all-Spanish UEFA Cup final last night were rewarded with a dramatic, engaging contest; let’s hope the Champions League final is half this much fun.
Adriano opened the scoring for Sevilla, but Riera equalised 10 minutes later and that’s how the game stayed until extra time, despite Espanyol having Moises Hurtado sent off for a second booking on 68 minutes. West Ham/Spurs alumnus Freddie Kanoute won it for Sevilla with a goal at the end of the first period of extra time – at least he thought he’d won it. With only four minutes left of extra time, Jonatas equalised for Espanyol, taking the game to penalties.
Having bravely taken the match to pens, Espanyol handed the game on a plate to their opponents – their penalty efforts were rubbish enough to warrant an ‘Are you England in disguise?’ chant. Sevilla ‘keeper Andres Palop saved three of their weak attempts and Sevilla lifted the trophy for the second year in a row – on reflection they deserved it, just, although Espanyol showed great heart. [Photo: Getty Images]
Click below to watch highlights of the matchâ€¦