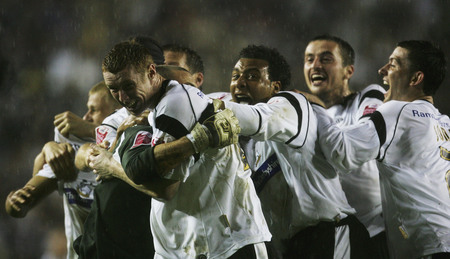 This tie was always too close to call and so it proved. I’m glad Derby won through in the end though – they did finish the regular season nine points above Southampton and that should count for something.
This was a thrilling match, unpredictable until the final kick. Grzegorz Rasiak’s late goal gave Saints a 3-2 lead and took the game into extra time with the aggregate score tied at 4-4. Inigo Idiakez’s penalty miss then sent Derby into the Championship play-off final (the richest club game in the world, worth at least Â£50m), where they will face West Brom. The Baggies are playing the better football right now and I tip them to make it to the Premiership. [Photo: Getty Images]
Click below to watch highlights from the gameâ€¦