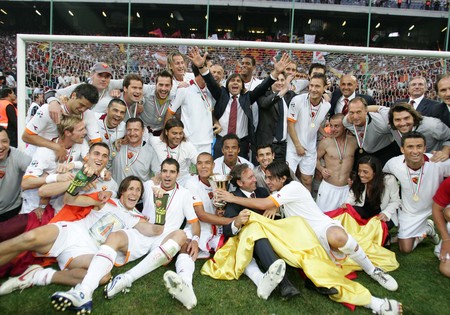 Roma’s squad and coaching staff celebrate winning the Coppa Italia after the second-leg match between Internazionale and Roma at the Stadio Giuseppe Meazza in Milan. Roma lost the second leg 2-1, but won the tie 7-4 on aggregate, having won the first leg 6-2. Both teams finished the game with 10 men, with Inter’s Ivan Cordoba and Roma’s Christian Panucci dismissed during a fiery match.
[Photo: Getty Images]