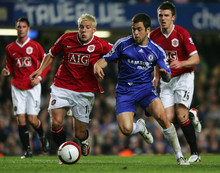 FA Cup final, Sat 19 May, Wembley Stadium
MAN UNITED TO BEAT CHELSEA IN 90 MINS (9-5)
The bookies are struggling to split the juggernauts but despite United’s poor record against Chelsea (just one win in 10) they are taken to triumph in normal time. Neither side is in great form (Man United just one goal in last four, Chelsea no wins in five) but the Red Devils can take advantage of an exhausted-looking Blues side with injury problems. They should be 13-8 shots and are, therefore, a value bet.

CRISTIANO RONALDO TO SCORE ANYTIME – 90 MINS ONLY (7-2)
Twinkle toes has bagged 25 goals in all games this season, takes the penalties and free kicks, shoots whenever given a half a chance (and sometimes even when he isnâ€™t) and is at the peak of his powers. All this yet William Hill are treating the preening Portuguese star like any other bog-standard attacking midfielder. Take advantage.
Champions League final, Wed 23 May, Athens
MILAN TO BEAT LIVERPOOL IN 90 MINS (7-5)
Milan should get their revenge for Istanbul and look a generous good price to do so. They are in good form (only defeat in 13 was at Old Trafford and have conceded just one in last four) they are classy enough to take the lead and, if they do, are highly unlikely to make the same mistakes they made in 2005. Those wanting a more patriotic bet (and believe that lightning can strike twice) should consider Liverpool to win on penalties at 9-1 their best chance.
MILAN V LIVERPOOL TO HAVE MORE THAN 2.5 GOALS (7-5)
Liverpoolâ€™s reputation for grinding out low-scoring victories in Europe has seen the market for under 2.5 goals priced up as low as 1-2. Therefore it is worth taking a punt that the game will feature at least three goals at the prices â€“ we all know what happened last time and goals could easily be on the cards again.
KAKA TO SCORE FIRST (8-1)
The Brazilian genius is top scorer in the Champions League this season and, simply put, reeks of big-game player. Kakaâ€™s performances over the two legs against Man United were nothing short of sublime (scored first goal in both games) and there must be a better than a one in eight chance that he will repeat the dose against Liverpool.
[Lee Honeyball]
Props to Lee for tipping Carlos Tevez to score first in Man Utd v West Ham season-closer last week. A 9-1 steal.