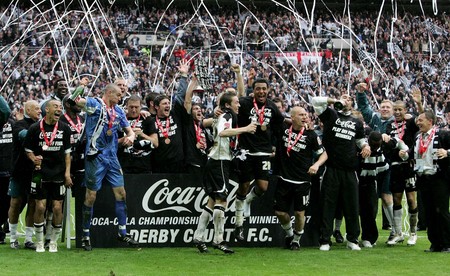 I think West Brom would have stood a better chance than Derby County of surviving what looks like being the most competitive Premiership ever next season – with players of the quality and experience of Jason Koumas and Kevin Phillips, they could have prospered.
But Derby, West Brom’s conquerors in yesterday’s Â£60m playoff final (watch the winning goal here), will surely struggle to survive unless they improve their team in the summer. Billy Davies is a very talented manager, but, as Matt Dickinson writes in The Times today, Davies has ‘failed to commit himself to Derby yesterday after a series of clashes with the board about the extent of his influence at Pride Park’. County must retain the services of Davies to stand a chance at avoiding the drop.

On the pitch, Steven Howard is an admirable centre forward from the old school, but I can’t see him troubling too many Premiership defenders. Elsewhere, Derby are solid but lacking a creative spark. They could do worse than go after Koumas, who deserves to be playing at the highest level and was unlucky to be on the losing team at Wembley.
Escaping from the Championship is damned difficult; as Derby will discover, staying in the Premiership these days is much harder. (Sorry to rain on your parade, Rams’ fans, but that’s the way we see it).