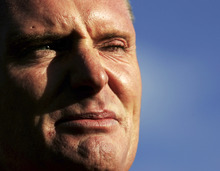 And so we read yet another chapter in the increasingly tragic Gazza story. Gascoigne has undergone emergency surgery for a perforated stomach ulcer. He is understood to have been taken ill while celebrating his 40th birthday in Gateshead. His agent Jane Morgan said: ‘Paul Gascoigne was admitted to hospital last evening with severe stomach painsâ€¦ He underwent emergency surgery for a perforated stomach ulcer and will remain in hospital for a few days. He’s recovering well from the surgery.’
The surgery followed a spell which saw him visit three hospitals in 48 hours, according to The Sun.
It seems that Gazza has the mind of a 12 year old and the body of a 52 year old, and the gap is only going to get bigger. Such a sad story – we still find it hard to comprehend that a professional sportsman can perform at the highest level but also be mentally ill.