A Finnish newspaper has uncovered the incredible influence of legendary Ajax playmaker Jari Litmanen had in the Netherlands.

Now 45, Litmanen played for the likes of Barcelona and Liverpool during a glittering career. However, it was with Dutch giants Ajax in the nineties that the attacker enjoyed his best years, winning the Champions League and picking up five Eredivisie titles.

Now, newspaper Helsingin Sanomat have highlighted just how big a deal Litmanen was in the Netherlands by listing a football team made up of players currently playing in the Dutch league (mostly) who were born during Litmanan’s heyday and who are all called Jari… 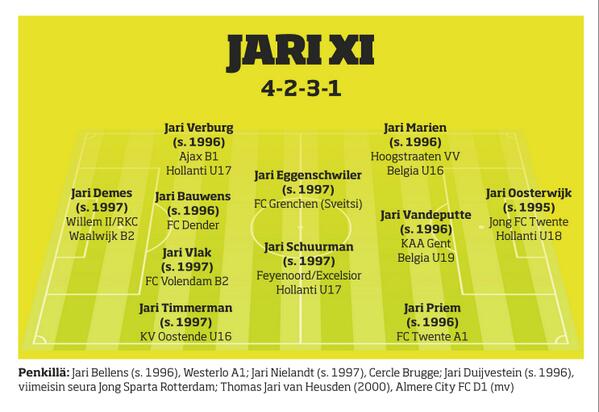 Expect myriad ‘Lionel’s and ‘Cristiano’s in years to come. And in Leicester a fair few ‘Riyad’s and ‘N’Golo’s!