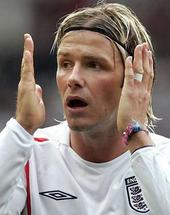 Now that David Beckham is looking lean, mean and hungry again – his brilliant performance against Deportivo last weekend put me in mind of his famous all-action display against Greece for England in 2001 – do you think he’s starting to regret his decision to leave Real Madrid for the States?
Pies reckons he must surely regret how quickly he made the decision to sign for LA Galaxy. He has at least two more seasons in him at the highest level in Europe, and MLS can’t offer the same challenges or rewards. If Beckham believes he’s giving up the prospect of more silverware for a lucrative season or two in the sun, then he’s bound to have doubts.
Fabio Capello has reportedly admitted Real have made a mistake in letting Becks go, at least according to record North American Soccer League goalscorer Giorgio Chinaglia, who said as much in a radio interview: ‘I phone Fabio Capello, I speak to him about once a week. He said “Giorgio, you can’t believe this kid; the turnaround around he’s done. We made a big mistake with this player”.’
Do you agree with Capello and Pies that Becks has made a Golden Balls-up?