1 Sao Paulo, Olympique Lyonnais, Barcelona (current). Whose career?
2 Brazil is the only nation to have played in every World Cup finals. True or false?
3 Picture round. Who’s this legend of Brazilian football? 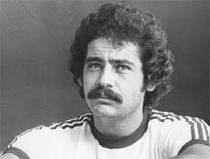 4 What’s the lowest FIFA international ranking Brazil has ever had?
5 What’s the only country to have played Brazil but never lost?
6 The club crest challenge. Which Brazilian team?