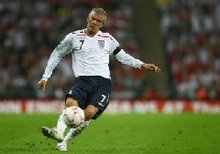 Paul Robinson One of his sharper games in an England shirt, and couldn’t really be blamed for Brazil’s late equaliser. 6
Jamie Carragher The least dynamic right-back in the world. We don’t dispute his many qualities at centre-back, but he’s nowhere near as versatile as Steve McLaren seems to think. 5
Ledley King A solid enough performance that should earn him a role against Estonia. 6
John Terry England’s defence looked very shaky after Terry went off, which says it all. Took his goal brilliantly. 7

Nicky Shorey Looked nervous early on, understandably, but settled in nicely and didn’t look out of his depth. He doesn’t have the class of Ashley Cole or the marauding instincts of Wayne Bridge, but he is a very useful back-up. 6
David Beckham This was the boyish Beckham England fans have missed – here we saw the enthusiast who runs his heart out simply because he loves playing football for his country. His dead ball to set up Terry’s header was simply wonderful. 7 MAN OF THE MATCH
Steven Gerrard Gerrard again proved that he can play against type and still be England’s best player. But how damn frustrating is it to watch Stevie G have to clean up after Frank Lampard has made yet another fine mess? 7
Frank Lampard How many times does Lampard have to underperform before he’s dropped? He did absolutely nothing of merit against Brazil apart from one woeful shot that went even higher than row Z. Owen Hargreaves and Steven Gerrard should be England’s central midfield pairing, everyone in the world knows that (apart from Steve McLaren). 5
Joe Cole Stop it with the crap stepovers already! And stop throwing yourself to the floor every time a defender reads one of your stepovers and tackles you. Cole had a half-decent first half but he needs to learn some new tricks and cut out the diving. 5
Alan Smith Never in the game. Looks desperately short of match fitness and form. Won’t start against Estonia. 4
Michael Owen Worked hard and made some encouraging runs but needs more support up front. Peter Crouch should partner him against Estonia. 6