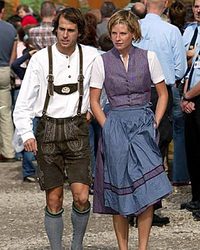 Whilst searching the internet for pictures of Radka Kocurova (it’s a hard life, Piesfolk), I stumbled across this tremendous picture of Mehmet Scholl (former Bayern Munich star) and his new girlfriend Jessica. I like a man who’s not afraid to be seen in public wearing leather shorts and knee-length socks (traditional Bavarian dress, I believe). Much braver than wearing a sarong, a la Beckham.
So I Wiki’d Scholl and he turns out to be quite an interesting character. In May 2002 and October 2003, he released two mixtapes, featuring his favourite music, from bands such as The Beta Band, Coldplay, The Flaming Lips and The Notwist. Pretty damn good music taste for a footballer.
Talking of football, Scholl was a fine attacking midfielder, and winner of more German league titles (eight) than any other player. He’s also very popular: before the 2006 World Cup, more than 100,000 people signed an online petition to persuade JÃ¼rgen Klinsmann to include Scholl in the German squad. Despite the public support, Scholl was not included.
Click below to watch a YouTube tribute to the Schollsterâ€¦