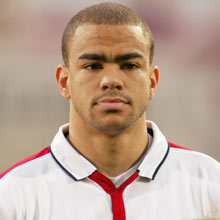 The word on the street is that Kieron Dyer may start at right-back for England against Estonia tomorrow. The Newcastle midfielder (there’s a clue in there somewhere, Stevie Mac) would replace the hopelessly one-paced Jamie Carragher, who played there against Brazil; Carra is set to switch to partner John Terry at centre-back, which makes more sense.
A fully fit Dyer is a definite asset to any England squad, but to play him out of position in a crucial qualifier away from home is a gamble, to say the least – I guess the management want him to overlap Beckham on the right wing and provide the injection of pace that Becks lacks. As much as it pains me to say it, Phil Neville is probably the best option McLaren has in the right-back slot at the moment.
It also seems that Peter Crouch will replace the ineffective Alan Smith up front, which again makes perfect sense. So the England starting XI against Estonia could be: Robinson; Dyer, Terry, Carragher, Shorey; J Cole, Gerrard, Lampard, Beckham; Crouch, Owen