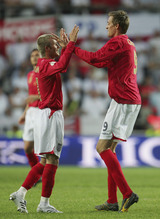 Paul Robinson Points for keeping a clean sheet but he is still unconvincing at this level and should have done better on a couple of occasions. 6
Wes Brown A wholly unremarkable performance. Had little defending to do, but hardly impressed going forward. 6
John Terry Hard to fault the captain. He made a valuable goal-line clearance in added time. 8
Ledley King Surely not as good a centre-back as Jamie Carragher, but the Tottenham man didn’t let anyone down. 6
Wayne Bridge Full of running and provided much-needed thrust down the left wing. Linked quite well with Joe Cole, but didn’t do quite enough to force himself above Ashley Cole in the pecking order. 7

Steven Gerrard Not quite as impressive as he was against Brazil. How he must crave a new midfield partner. 6
Frank Lampard Better than against Brazil, but not by much – seems to be playing from memory. Has to make way now for Owen Hargreaves or Michael Carrick. 5
David Beckham A revelation since his return to the England fold. Set up two goals – his pass for Crouch’s goal was a beauty. We only wish he would not drop so deep to pick up the ball sometimes. As a result, England’s attacking patterns are very, very predictable, but when Becks gets it right, they are also impossible to defend against, so who are we to argue? 8 MAN OF THE MATCH

Joe Cole A sublime finish but didn’t do too much else. 6
Peter Crouch Set up one and scored one with a well-judged finish. Can’t argue with his effectiveness or his recent scoring record. One point off for a silly booking that rules him out of the Israel qualifier. 7
Michael Owen Looking sharp again. Took his goal well. 7