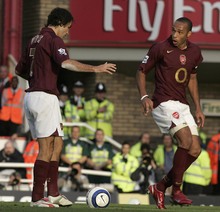 Arsenal fans won’t thank Bob Pires for quotes in the Spanish press urging his old mate Thierry Henry to leave London and join Barcelona:
‘Thierry Henry would be very happy at Barca. I should not be saying this [but I’m going to anywayâ€¦], as Arsenal, their manager and their fans are all very good. But it would be best for him to make the change. Arsenal are at the end of a cycle. They have lost good players in Patrick Vieira, Edu, Ashley Cole, Dennis Bergkamp and myself.’
Nothing like stabbing your old team in the back, is there?