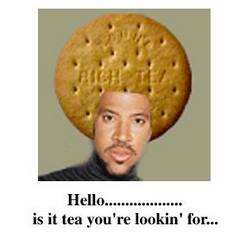 More proof that John Terry’s wedding last week was the classiest show in town. News agency Ananova reports that pissed up guests heckled the great Lionel Ritchie, who had been booked to perform at the reception:
Rich Tea was reportedly stunned to be heckled when he sang for Premiership footballers at John Terry’s wedding. The superstar admitted afterwards he thought he had taken a wrong turn and ended up in a local working men’s club.
Ritchie was paid almost Â£250,000 to play at the reception at Blenheim Palace at the special request of bride Toni Poole. But after his first song he had to ask guests, who included Wayne Rooney, Coleen McLoughlin, Jamie Carragher and Frank Lampard, to pipe down.

A witness said: “It was really embarrassing. Toni was looking very anxious about the lads making a real fool of herâ€¦ When he started singing Hello the boys started chanting back to him as if they were on the football ground terracesâ€¦ They had downed so much champagne at the reception the guests became really lairy and started shouting over his set.
‘In the end he asked the crowd to be quiet and said, “I’ve only got two more songs, please stick with me.” When he came off stage he moaned to one of the organisers, “I imagine this is what it’s like at a working men’s club”.’
You can’t buy class.