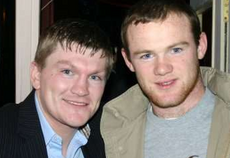 Ricky Hatton, who fights Mexican hard nut Jose Luis Castillo this weekend for his world light-welterweight title, is an avid Man City fan. Hatton naturally hates Man Utd with a passion. So who better to carry out one of his title belts to ringside in Vegas on Saturday thanâ€¦ Wayne Rooney (who is a huge boxing fan and boxed as a youngster)?
Hatton is unrepentent at choosing a United player to represent him. Above all, Rooney is a great friend of Hatton’s: ‘I’ve known Wayne for a few years,’ Hatton says. ‘When we met, we just hit it off. We have the same sense of humour and we love to talk boxing. I like to keep my feet on the ground and so does he.
‘I’ll have Wayne in the dressing room with me. A few people on Manchester City websites have criticised me for that. But they shouldn’t give a shit about who’s carrying the belt. They should just look at his face when Blue Moon [the City anthem] strikes up and everyone’s singing. Listen, nobody hates Man United more than me, but Wayne’s a mate.’