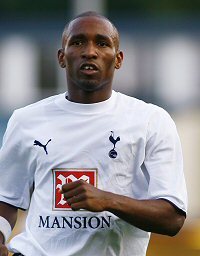 A few seasons ago, Jermain Defoe was being talked about as a future England star. Now he finds himself as fourth-choice striker (behind Dimi Berbatov, Robbie Keane and, arguably, Darren Bent) in a team that can’t win the Premiership. His career has stalled dramatically and I find it hard to put my finger on a specific reason why it’s happened.
Martin Jol’s fondness for squad rotation hasn’t helped Defoe, but there’s something in Defoe’s body language that suggests he finds it hard to keep his head up when things go wrong. There are several Premiership teams who would happily take Defoe and put him straight into their first team, so I can’t quite understand why he has come out today and said that he wants to stay at Spurs and fight for his place: ‘I’m really excited about the new season and the prospect of another campaign in Europe,’ he said. ‘We have made some good signings and are now stronger and better equipped to compete in all competitions.’

I think it’s telling that Defoe mentions Europe and ‘all competitions’. He clearly feels that he will get enough first-team football, in Europe and the English cups, to keep him happy. Is that ambitious enough for a player of his talent though?
As a Spurs fan, I’m delighted with our quartet of strikers, which is as strong as any in the top flight. Surely the waste of space (a lot of space) that is Mido will now f-off in the next few weeks.
As for Defoe, I’m not sure if I admire his decision to stay, or think that he’s taking the easy option when he could be pushing himself to reach a new level in his career. Maybe he should try his luck in Italy or Spain – it’s a shame that so few English players take the risk to play abroad to further their careers.
What say you, Piesfolk?