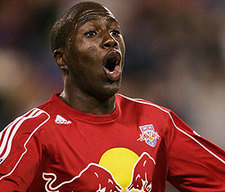 Josmer ‘Jozy’ Altidore, a striker for New York Red Bulls, is still only 17 years old but he’s not looked out of his depth in the MLS, scoring twice in New York’s first three games this season. The Red Bulls are being extremely protetcive of their young star. Since the arrival of Juan Pablo Ãngel in NY, Altidore has started only two matches.
Altidore is currently in Canada with the US squad, competing in the U-20 World Cup. He scored in his country’s 6-1 demolition of Poland, although he was overshadowed by Freddy Adu, who bagged a hat-trick. Altidore is a big muscular lad (6ft 1in) with a fierce, Jimmy Floyd Hasselbaink-esque shot, who would be perfectly suited to the hustle and bustle of the Premiership. Once he’s served his apprenticeship in MLS, I wouldn’t be surprised to see him end up in England. He certainly has the talent to go to the top of the game.
Click below to watch a couple of clips of Jozy in actionâ€¦