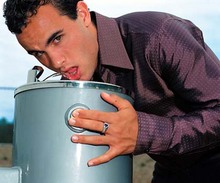 A big fat ZERO. Yeah, nil points. That’s what the USA scored in this year’s Copa America, after defeats at the hands of Argentina, Paraguay and Columbia. Eight goals conceded, two goals scored.
Buy hey, that’s what you get when you send a virtual B team to take on the best teams in South America. Without the likes of Landon Donovan (pictured vomiting up his small intestine after the US’s weak effort) and DeMarcus Beasley in their ranks, what did the US really expect? They took a squad including 16 players with 10 international appearances or fewer and paid the price. Six players from the States’ CONCACAF Gold Cup-winning team returned to MLS instead of travelling to Venezuela, which is shame – I’d like to see how a full-strength US team matches up against the cream of South American football.
Brazil, who have rested Kaka and Ronaldinho (at the players’ request) are strong enough to play with second-string footballers, but the US are not yet in that position. Oh well, there’s always the U-20 World Cup to shoot for.