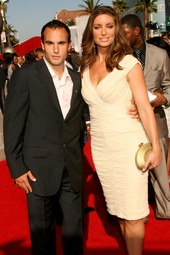 Name: Landon ‘Landycakes’ Donovan
Age: 25
Position: Playmaker (and team captain)/All-American hunk
What’s his story? After Becks, square-jawed Lando is easily the Galaxy’s best-paid player, on a reported $900,000 a year. He joined the Galaxy in 2005, from San Jose Earthquakes, where he was on loan from Bayer Leverkusen. Donovan is the USA’s highest-profile player, although he had a low-key World Cup in Germany.
What does he think of Beckham’s arrival? Seems to be in favour of it, perhaps because it will take some of the pressure/expectation off him. Was quoted recently as saying: ‘David’s a great guy. I’d heard that from people, but now I can confirm it… I think he’s done great so far. We want to get him on the field, training and playing, and that will be the most exciting thing.’
Did you know? He’s married to actress Bianca Kajlich. Pies has a small crush on her. (That’s not her in this photo, btw – just some giant chick who accompanied Lando to some red-carpet bash.)