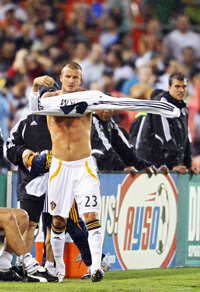 The wait is over. David Beckham made his long anticipated MLS debut last night when he came on as a 72nd minute substitute for or the Los Angeles Galaxy.
Although Goldenballs was unable to prevent a 1-0 defeat, he did pull off a couple of Hollywood passes that created chances for teammates and showed no sign of the ankle injury that kept him from the American public.
He was rated â€˜questionableâ€™ before the game but maybe the presence of England coach, Steve McLaren, spurred him on. So, with only 12 days to go before Englandâ€™s friendly against Germany (including flying time) do you think that McLaren will select him?
Or, have previous attempts to bring back crocked stars too soon taught him anything?