As we mentioned on Friday, Pies is serving up a lot more continental dishes this season for you to enjoy alongside the bread and butter of your Premier League news, banter, videos and pictures. So following the inaugural French Football Friday, welcome to La Liga Lunes. You’ve guessed it, our weekly round-up of Spanish football. 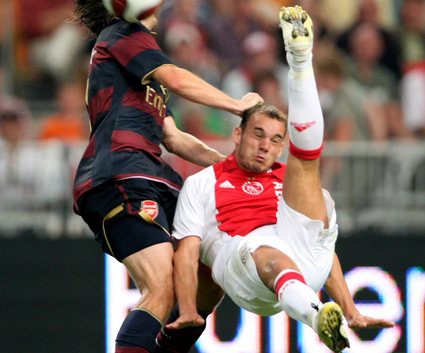 La Liga doesn’t kick into life until the last weekend in August, but the usual pre-season rituals are in full swing. In the Spanish Super Cup, Seville took a 1-0 first-leg lead over Real Madrid thanks to a Luis Fabiano penalty. The second leg will be played next weekend.

Meanwhile, Real’s new German coach Bernd Schuster has decided he would rather have taken over the Holland national team. Instead of handing in his notice, the former Getafe boss is just signing all the Dutch players he would liked to have worked with. Schuster has splashed the cash on Ajax midfielder Wesley Sneijder (Â£18.3 million) and Feyenoord’s Royston Drenthe (Â£8.7 million). The pair will team up with Ruud van Nistelrooy at the Bernabeu, and Real’s chase for Chelsea winger Arjen Robben has been well publicised. Watch your backs, Wigan! Mario Melchiot could be next.
Real – they have been busy boys this week – also found time to lose the Trofeo Teresa Herrera (like the Community Shield, but with sweat and a bit of passion). Hosts Deportivo La Coruna won the match 2-1
[Via 101Greatgoals]
More from La Liga next week.
[Photo Phil Cole/Getty Images]