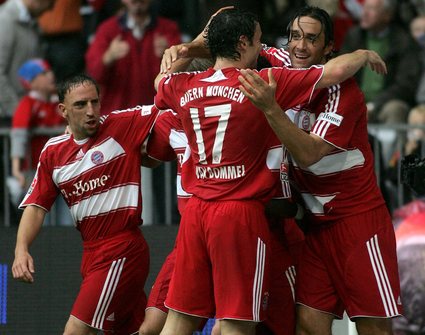 Bayern Munich are playing the part of Liverpool this season. With their pedigree and tradition last season’s fourth place finish in the Bundesliga just wasn’t good enough. And while the Reds of Anfield have settled for nearly two decades without a domestic title before this summer’s mammoth spending, Die Roten of Bavaria have instantly splashed the cash to get their title back. And the ploy seems to have paid off.

New signings Luca Toni and Miroslav Klose (two) were on the scoresheet in a 3-0 victory over Hansa Rostock. Fellow newcomer Franck Ribery, pictured lurking at the back of the team celebrations looking a bit like Quasimodo, also played in the match. Extended highlights below:

Elsewhere, Schalke’s Danish striker Soren Larsen has been hospitalised after clashing with keeper Manuel Neuer in training. The 25-year-old told a Danish newspaper he was pushed by team-mate Mladen Krstajic causing him to collide with Neuer. He is expect to be out of action for about six weeks after breaking three ribs in the incident.