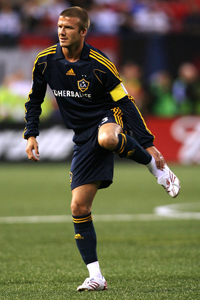 Becks made his first start for the LA Galaxy at the weekend but, despite a hat trick of assists, he couldn’t prevent his team from losing 5-4 to the New York Red Bulls.
While nine goals in one game would have pleased the 66,000 sell out crowd, it’s not a score line that you’d usually associate with professional football and most of the goals came from the type of defending that would give Alan Hansen a coronary.
It’s going to raise a few more questions about the standard of the MLS and, with Beckham’s ankle taking a pounding on the artifical surface used at the Giants Stadium, there are doubts whether he will be fit for England’s midweek friendly.
Click to see all the goals

Beckham hadn’t expected to play the full 90 minutes but stubbornly stayed on at the expense of his ankle injury, which means England’s prodigal son might not be ready for Wednesday’s friendly against Germany – especially as the Galaxy play again the following day.
‘I’m coming back (Wednesday night) and I’ll be sleeping all the way on the plane, hopefully getting plenty of rest and able play some part of the Chivas game on Thursday. I think its important for me to get back and to be at the game. I’ll definitely be there and hopefully I play some part in it,’ he said somewhat optimistically.
He’s obviously trying his heart out but has Becks bitten off more than he can chew?