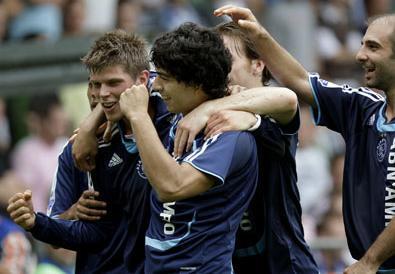 We thought Bayern Munich had thrown the gauntlet down to the other teams in the Bundesliga, but in neighbouring Holland the signal of intent from Ajax has been emphatic. They thrashed De Graafschap 1-8 in the opening round of matches of the Dutch Eredivisie. Klaas Jan Hunterlaar weighed in with four goals.

Here are the highlights. Watch the goals thumping in accompanied by an equally thumping Eurobeat.

And while watching that video, we couldn’t help but notice that Ajax seem to have an unlikely fan in the shape of former Feyenoord player Dirk Kuyt. 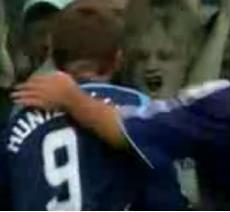 Holland face Switzerland tonight in a friendly. The match will mark Ruud van Nistelrooy’s return from the international wilderness. He has not played for the national team since falling out with Holland coach Marco van Basten at last summer’s World Cup.