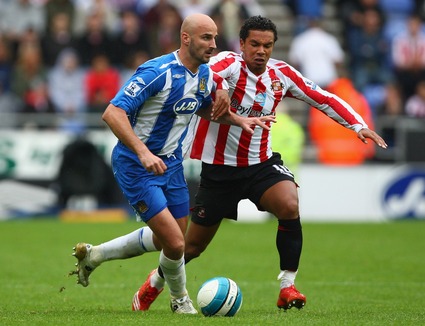 No player has scored more Squadgod fantasy points so far thanâ€¦ Antoine Sibierski (pictured, above, with Sunderland’s Kieran Richardson). That’s right, Wigan’s Gallic slaphead has bagged an incredible 70 points so far. Other players who have started strongly are Micah Richards (three games, three clean sheets) and Frank Lampard (whose shoot-on-sight policy is rewarded in this league, where shots on goal score extra points).
After a shoddy start, I have slipped even further down the table (which you can view after the click). But, like Martin Jol, I’m hoping to bounce back in Septemberâ€¦

This is how the league table looks after the second week of scoring (click image to enlarge):

Congrats to cone617, whose Ardwick AFC XI has taken over at the top. Week One leader DDG has slipped to fourth place, but is still very much in contention.
An honourable mention also goes to Taran, whose team boasts one of the best names in the Pies league: ‘Carlsberg don’t do fantasy football teams, but if they did, they’d probably be the same as this one.’ Superb work.
To view the full table, check out Squadgod