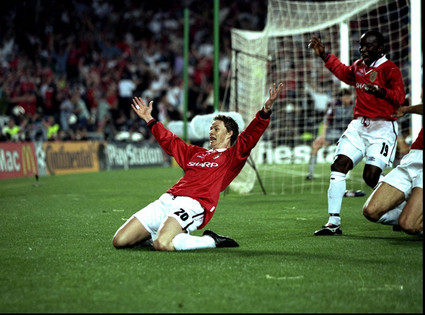 Photo Getty Images
Arguably the most popular footballer in Premier League history – even Man City fans quite like Solskjaer – is to retire from the game, aged 34. A series of knee injuries has afflicted the Norwegian in recent seasons, and he’s sensibly decided to call it a day. He has already been involved in coaching young United players and was appointed a club ambassador last year – so it’s safe to say he has a job for life at Old Trafford. And quite right too.
As the player who scored the winning goal in Man Utd’s famous, treble-sealing Champions League final win against Bayern Munich in 1999, Ole will forever be a United legend. Not only that, but he’s one of the nicest, most modest men to have played the game. He’s also underrated â€“ perhaps his modesty contributed to that â€“ but true United fans appreciate his quality and worth to the team. What a stylish striker he was at his peak, and one of the deadliest finishers around. And whilst it’s a cliche to say that he has been a loyal servant to Man Yoo, it’s also true.
Ole, we wish you well. All genuine footy fans will miss you.
Click below to watch videos of Ole’s finest five momentsâ€¦

4 You Are My Solskjaer, My Ole Solskjaerâ€¦

More Man U news and views at Man United Pies