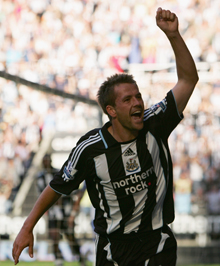 Itâ€™s been a long time coming but Michael Owen rediscovered his shooting skills with his first league goal for two years as Newcastle beat Wigan at the weekend.
Although he missed at least four chances before claiming the late winner, the fact he eventually found the net is good news for Englandâ€™s approaching Euro qualifiers against Israel and Russia.
Owen is a shoe-in to start the decisive games, but with injuries and suspensions restricting our supporting strike force â€“ who should partner him up front?

Peter Crouch is suspended for the first game but a big man/small man partnership could still be on the cards courtesy of Emile Heskeyâ€™s late call up. Despite the Wigan strikerâ€™s shot shyness, he shares an impressive partnership with Owen at club and international level and apparently heâ€™s the one that Owen would prefer by his side.
Another option would be to pair two fleet-footed but undersized strikers together by using either Jermaine Defoe or Andy Johnson. But Defoe is still trying to claim a starting position in the Spurs team and Johnson hasnâ€™t scored yet this season.
Then thereâ€™s Alan Smith, although even he canâ€™t be sure what position he calls his own anymore.
Thereâ€™s also been talk of using a â€˜Cole in the holeâ€™ with Chelseaâ€™s Joe Cole inventively linking the midfield, but heâ€™s another player that hasnâ€™t had much playing time this season.
So, who do you think is the best man for the job?