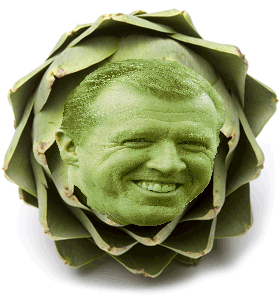 Former drunk Tony Adams has come out in the press today to compare Steve McLaren with “turnip” Graham Taylor. The Sun even dare call poor Steve a McTurnip. There are of course two minor problems with this theory. Firstly, Steve McShinyteeth lacks the tactical knowledge of Taylor, secondly the turnip has already been taken in England manager folklore. As of course has the swede.
So lets think outside the box here. What vegetable mosts suits McLaren? For our money it has to be the artichoke…

Here’s the veg in contention:
1) The Cauliflower.
Perchance the whitest of God’s many fine vegetables, this could work for Steve as the gleaming pale glow of it’s crunchy husk is reminiscent of Steve’s ridiculous teeth.
2) The Artichoke
Whenever there’s a big decision (getting rid of Beckham, getting Beckham back, playing injured players, sorting out Jamie Carragher, etc) Steve always seems to choke, and cock up the decision.
3) The pea
As in pea brain.
4) Tomato
So inept is Steve on occasion that the tomato would be a nice choice. Largely because technically its a fruit, and if he gets stuck with this, he’ll have even of managed to balls up his vegetable during his England reign.
5) Horseradish
We don’t what it is, but he just looks like a horseradish.
6) Kohlrabi
A misunderstood but frankly very good vegetable. If Steve was picking out veg himself, we reckon he’d choose himself a kohlrabi.

So what veg do you think most suits Steve? Let us know with your comments etc…