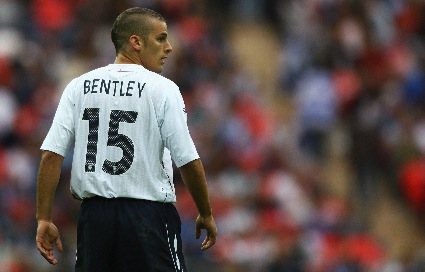 It was almost quite heart warming to hear Bentley booed by England fans at the weekend. With so many empty seats as corporate goons stuffed their faces with Wembley frois graux and prawn sangers, the rings of boos every time the Blackburn winger touched the ball, let the world know real England fans were also in the ground. Fans who were (rightly!) disgusted that the hugely gifted Arsenal reject had snubbed an under-21 call up in the summer. But this got us thinking, what other grrrrrrrreat players have been booed by England fans…
Photo: Getty

1) Shilton.
Some say he was never a good goalie, all agree he was a big dodgy near the end. Technically we would have beaten Germany in Italia 90 if he had been at his best. Hence a few boos near the end.
2) Des Walker
Brilliant player whose injuries saw him play terribly on a regular basis for England.
3) Gary Neville
Arguably England’s finest ever right-back, but he’s such an annoying little toad man even Manchester United fans must struggle to resist the odd little boo.
4) Owen Hargreaves
So respected is Owen now, it’s hard to remember just how hated he was before the World Cup. The poor Canadian was booed like a pantomime goblin for years…
5) Frank Lampard
If he plays in the week, he’ll probably be booed. Extremely harsh on the poor fatty who is without doubt one of England’s most talented players.
6) David Beckham
Booed for months after he acted like a bit tit and kicked that Argie. Luckily this seemed to fire him up and turn him into a better player.
7) John Barnes
Booed throughout his England career as he failed to live up to his tag as one of the world’s best players. If ever there was one, Barnes is an example of a player who couldn’t handle the boos. They frankly destroyed his England career.
8) David Batty
Few people knew why he was playing near the end, and though the boos made him angry, they didn’t make him better.
9) Carlton Palmer
Well, even Carlton would have expected it.
10) Peter Crouch
Deemed by many not good enough for England, he silenced the boo boys quickly with goals.
11) Emile Heskey
Booed for months, but now oddly an England hero again?
The Manager: Sir Alf.
It’s remarkable to think Alf was hated near the end of his reign, but he was.

So who have you enjoyed booing the most for England? Let us know…