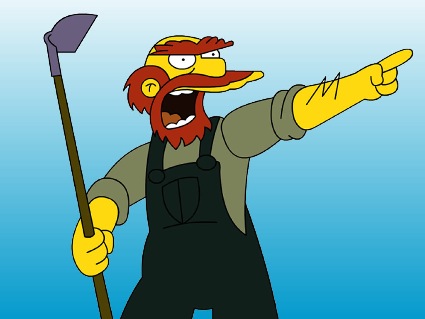 We’ll be honest we very rarely read the Glasgow Evening Times, due to (a) Pies HQ being 500 miles from Glasgee, and (b) us being HUGE fans of the Glasgow Evening Echo. But yesterday we read the future deep-fried pizza wrapper, whilst researching a feature about head-butting we’re trying to cobble together for some posh magazine. Anyway (or “anyhoo!” as they say in Glasgee) we’ll get to our point. Och!
The paper carried a story on the Tartan Army that has frankly warmed our cold cold heart. The thousands of kilt wearing legends, yesterday bravely forced the French police to re-open their favourite pub without remotely resorting to violence / croissant chucking. It’s a story that puts most football supporters to shame (and even more so us, for illustrating this story with Groundskeeper Willy from The Simpsons)…

Thousands of jock fans who had made their way to the French capital ahead of tomorrow’s clash France, combined with those already out there for the rugby, but were left gutted to discover the shutters were pulled down on their favourite watering hole.
Local police had told The Auld Alliance pub to close amid fears fans spilling out would be a rush-hour traffic hazard. Fair point, we’ve all seen how Parisians drive. But the move led to aggrieved Tartan Army members staging a sit-down protest in the street. Like 1000s Gandhis in skirts! Following some hasty negotiations with the local police, the shutters came back up. Brilliant.
The pub owner, Stevie Graham, said: “The French do not realise the Tartan Army travel in huge numbers. When we were told to close, some fans bought carry-outs from the supermarkets and sat down in the road. The cops quickly did an about-turn and told us to re-open.”

Is this further proof that the Tartan Army are the best international supporters in the world?