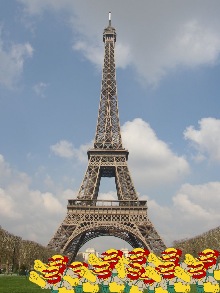 BREAKING NEWS! According to reports on TalkSport the famous tartan army have just reached the Eiffel Tower… in their thousands. Apparently up to 15,000 jocks are converging on the giant froggy hunk of steel for a bit of a party and a sing song.
That’s all fine, until you find out what they’re singing. “Do-a-deer-a-female-deer!” from The Sound of Music. Can anyone please tell us why the hell they’re singing this? And while you’re at it, can anyone think of any other odd ball International chants. The Italians breaking into the White Stripes Seven Nation Army at the last World Cup instantly comes to mind. As does the German’s singing “Football’s Coming Home” wihtout a trace of irony. So have you heard any other gems? Do Slovakia sing James Blunt? Do Russia sing Back in the USSR?