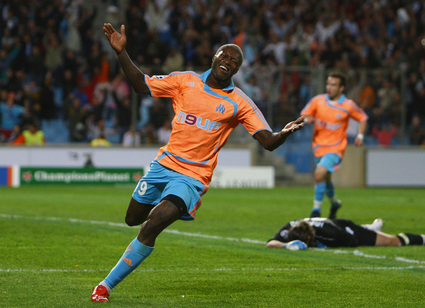 1 Marseille’s European home kit (see photo, above) is horrific. On the positive side, Djibril Cisse, who scored in the French side’s win over Besiktas, is looking goodâ€¦ until he next snaps one of his rubber legs, that is.
Photo Getty Images

2 Andrea Pirlo takes a mean free-kick, as we saw last night, when he scored this pearler against Benfica.
3 Resting Steven Gerrard against Portsmouth didn’t seem to do him much good, judging by his lacklustre performance against Porto.
4 You only realise how good Frank Lampard is when he’s not there. Same goes for Didier Drogba. Chelsea aren’t exactly a two-man team â€“ John Terry and Petr Cech are key too â€“ but boy did they miss Fat Frank and the Drog last night.
5 If I could listen to just one manager’s post-match press conferences, I’d choose Gordon Strachan’s. He never dodges a question and always has a twinkle in his eye. And will a Scottish team ever win away in the Champions League? I can’t remember the last time it happened. Answers on a postcard please.