Juve’s brief return to the top of Serie A is over after their defeat to Udinese, despite having recently appointed God on earth (or something like that), Alex Del Piero, in their ranks. The result had some of the Italian press sniffing a rat, or at least another match-fixing scandal.

It is Roma who now top the Italian league. Debutant centre-back Juan opened the scoring in their 2-0 win over Reggina by deciding he is, in fact, the new Gianfranco Zola.

In the Champions League, both Roma and Milan got off to good starts with victories over Dynamo Kiev and Benfica respectively. Inter Milan suffered defeat at Fenerbahce and Lazio shared the points with Olympiakos.
Positions you never thought you would find Phillipe Mexes #982 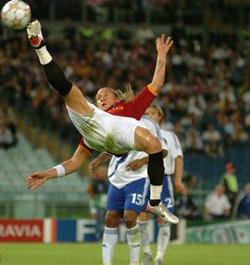