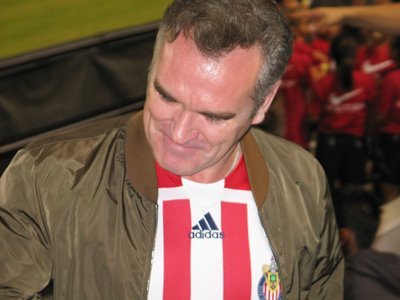 Your eyes do not deceive you â€“ that is indeed the very same Steven Patrick Morrissey who once stuffed his pockets with gladioli and fronted The Smiths. Moz has a big Mexican fanbase and Chivas are primarily supported by fans of a Mexican/Hispanic background, so it could be a shrewd move to shift a few more albums â€“ either that or he just loves the colour scheme.
It’s not the first time Mozza has been linked to the footballing world. He is good friends with journeyman striker Kevin Gallen, who is currently playing for MK Dons. And he recorded an album called ‘Your Arsenal’ in 1992, but I don’t think that has anything to do with the Gunners!
Via The Offside Rules