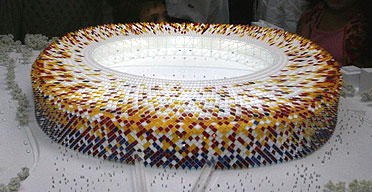 The Nou Camp is one of the most football stadiums in the world (should that read stadia?) and has seen some of the most wonderful footballers in history grace the pitch… Johan Cruyff, Ronaldinho, Diego Maradona, Luis Figo and… Steve Archibald. Now, Barcelona‘s Nou Camp is to get a new look with a redesign by the award-winning British architect Norman Foster.
According to The Guardian, Lord Foster has been chosen by the Catalan club to redesign the 98,000-seater stadium at a cost of â‚¬250m (Â£175m). The stadium celebrates its 50th birthday today and will be given a complete facelift with a mosaic of multi-coloured tiles in blue and scarlet (Barca’s colours) and red and yellow (the colours of Catalonia’s flag). Presenting his plans to add a “second skin” to the stadium’s outer shell, Lord Foster said he had been inspired by the trencadis, a mosaic style consisting of broken tiles made famous at the turn of the century by Antoni GaudÃ­, Barcelona’s favourite son, whose highly individual work can be seen across the city.

In a presentation in front of stars from the club’s past and present Lord Foster said his intention was to maintain its original asymmetrical shape, designed by the Catalan Francesc Mitjans i MirÃ³. The redesign will increase the Nou Camp’s capacity to 106,000. It will also be given a retractable roof, supported by cables, which Lord Foster described as a “flexible, sustainable and ecological solution”. The exterior, made of a mixture of polycarbonate and glass panels, will be able to change colour, allowing the outside of the stadium to be used for light displays at night or as a giant TV screen.
Construction work will begin in 2009 and is due to be completed by the start of the 2011-2012 season. Of course, Lord Foster is the man behind many landmarks, including the Millennium Bridge, the Gherkin, Berlin’s Reichstag and the new Wembley stadium. Perhaps the most important element of the new-look Nou Camp is one that is guaranteed to keep football fans happy: the work will not affect any matches.