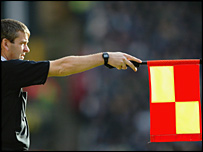 Reports are saying that our referees and assistants have been told to favour attacking teams on tight offside calls after being sent a directive that tells them: “Don’t get stuck in a time warp. Gone are the days when we would prefer a ‘dodgy offside’ to a ‘dodgy goal’.”
The directive comes as a result of a briefing from the referees’ coach Paul Rejer, who told officials: “Think about it. Fans, media, everyone would like to see more goals. FIFA are promoting attacking play with the emphasis being on the benefit of the doubt to the attack.”
Surely we as fans want the right decision as opposed to one that favours any particular player? Well, Professional Game Match Officials Limited, feels that a linesman will get more stick for wrongly disallowing a goal than incorrectly awarding one.

This move comes after the linesman Peter Kirkup wrongly flagged when Salomon Kalou got the ball in the net for Chelsea during the 0-0 draw against Blackburn in Jose Mourinho’s last league game a fortnight ago. On Wednesday night in the Carling Cup, TV replays showed a Diomansy Kamara “goal” for Fulham should have stood with the extra-time score against Bolton at 1-1. The incident sparked an outburst from Fulham’s manager, Lawrie Sanchez and Fulham went on to lose.
What do you think of this proposal? Like any football fan, I imagine that I’ll be all in favour of it when it helps my team out, but will cry foul if it continually goes against. Is this kind of thinking going to confuse matters further, or is it a move in the right direction? Your thoughts are required as ever Pieheads.