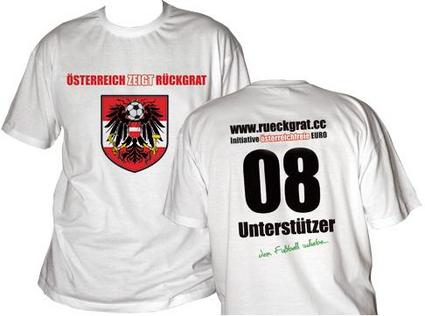 Fans of Euro 2008 co-hosts Austria have launched a petition to have their national team thrown out of the competition on the grounds that they are going to humiliate the country. The Ã–sterreich zeigt RÃ¼ckgrat (Austria show backbone) initiative calls for the team to be withdrawn for the benefit of football fans everywhere and national pride in Austria. The website tells its English-speaking visitors: “It cannot be denied: the performance of the Austrian team is an insult to your sense of aesthetics as well as to what you expect from this sport. Their participating in the Euro 2008 is to you a contradiction in itself. We understand.”

The website goes on to add: “Austria was once a country with a keen sense for aesthetics; ‘a people gifted for beauty’, as a verse of our national anthem states â€“ an anthem our players barely manage to stammer along to, as they pale-facedly contemplate yet another gruelling encounter with the ball and the opponent. We want to show the world that we still embrace beauty. And at the same time, we want to do something that is as alien to our people as the names of our strikers are to foreign football experts: To show some dignity!”
Click here to sign the petition or even buy one of the official t-shirts (pictured above).