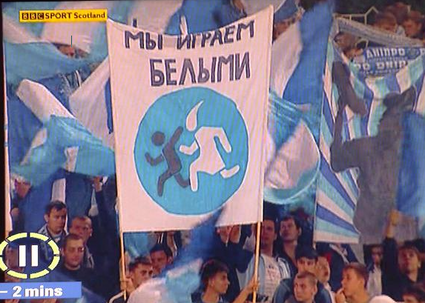 Take a look at this picture of Dnipro supporters, snapped off the telly by an eagle-eyed fan. What the hell is going on with that banner? If that’s not racist, I don’t know what is! Or am I imagining the ‘Klansman-chasing-black guy’ theme of the banner?
By the way, congrats to Aberdeen, who continued the good form of Scottish clubs in Europe by beating Dnipro – justice! A 1-1 draw in the Ukraine last night was enough to see them through to the next round. But Uefa should investigate the banner further. If anyone can translate the wording on the banner, that might clear things up.