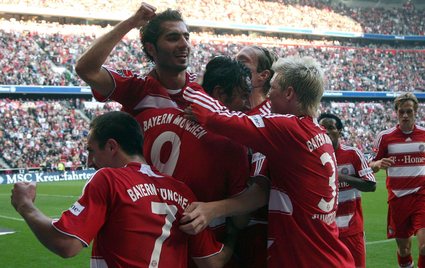 We don’t want Teutonic Tuesday to become Bayern Munich-watch, but it is impossible to ignore them when they keep putting three or four goals past every team they come up against and dominating the Bundesliga. Just ask Nuremburg – the latest victims served up for Bayern by the fixture list – who were on the receiving end of a Luca Toni brace and a Ze Roberto goal at the weekend.

Here are Bayern in full flow:

All Goals – Bayern Munich vs. 1. FC Nuremberg – MyVideo
Oliver Kahn and Jens Lehmann have reignited their long-running battle of the egos. Bayern keeper Kahn took the sight of Lehmann sitting on the Arsenal bench as the perfect opportunity to stake his claim for the Germany keeper’s jersey. He made it known that “you can’t be the national keeper if you don’t play for your club”. Jens – never one to back down from a bit of confrontation – responded by saying that “always playing for your club, but playing badly” was equally bad for your international prospects!