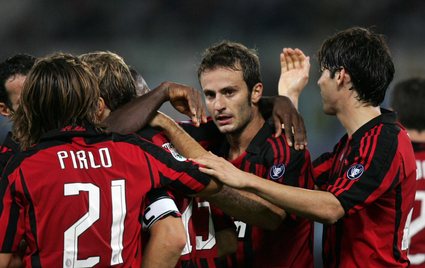 Champions League-obsessed AC Milan have given the first indication that they might actually care about Serie A with an emphatic 5-1 win over Lazio. The Rossoneri are still down in eighth – while city rivals Inter top the table seven points ahead of them – but this was certainly a better performance. Goal-shy striker Alberto Gilardino, without a goal in five months, found the net twice in the rout to break his duck.

All the goals from Serie A this week are in the video below. Marco Borriello’s shot on the turn for Genoa against Cagliari is particularly worth keeping an eye open for.
Gianluigi Buffon: the next David Blaine or paranoid moron? The Juventus keeper apparently left Fiorentina’s stadium after their match at the weekend in the boot of his car (I think someone else was driving, otherwise this would be even more impressive) fearing attacks by rival fans. He boasted: “It is not the first time I invented a trick in Florence but the second. One time, so opposing fans would not recognise me, I wore a clown mask.”
Photo Getty