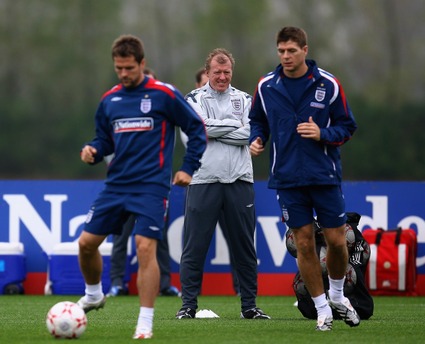 England v Estonia (Sat 13 October, Wembley Stadium, K.O 3pm BST)
Mark Lawrenson cautiously predicts a 2-0 win for England, and it’s hard not to agree with him this time. Estonia will surely play with damage limitation in mind, keen not to repeat the 3-0 win they suffered at home, so, in the words of Alan Hansen, ‘England have to be patient, keep the ball and wait for gaps to appearâ€¦’ Or something like that.
Team news In defence, with John Terry out injured (it’s amazing â€“ his head must be hanging off his shoulders), it seems certain that Sol Campbell will team up with Rio Ferdinand at the back. Micah Richards and Ashley Cole pick themselves at right- and left-back, although Cole is on a booking so Nicky Shorey may ‘get the nod’. And despite playing shit for Spurs, Paul Robinson has kept a clean sheet in his last five international games, so there’s no need to drop himâ€¦ yet. We still don’t know if in-form Gareth Barry or Frank Lampard will partner captain Steven Gerrard in central midfield. I’d go for Barry, who excelled in England’s last two outings; Lampard is a useful sub to have. Out wide, I guess that Joe Cole will play on the left, with Sean Wright-Phillips on the right. Up front, Macca must go with Michael Owen and Wayne Rooney â€“ although that’s an early substitution waiting to happen.

Prediction England 3-0 Estonia. I could see a tight first half, but England will surely open Estonia up in the second half. Anything but a win is out of the question. Complacency is England’s only enemy.
Top tip England are a prohibitive 1-16 to win the game â€“ no value there at all. Instead I suggest you lash out a couple of quid on a correct score/first goalscorer double. A 3-0 England win/Stevie G to score first double is 28-1 â€“ with Stevie G taking the captain’s armband, I wouldn’t be surprised to see him step up and bang in the opener.
Photo Getty Images